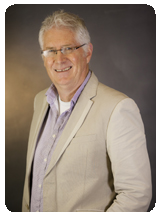 Chris Bailey was last night honoured at the 2015 SPADA Conference with the Industry Champion Award.

There is no person working in TV in New Zealand who has produced and directed more drama than Chris Bailey. For over 40 years he has been a key part of New Zealand’s TV scene. Beginning in Christchurch as a technical trainee, Chris moved to Auckland in the mid 70’s and enjoyed the comprehensive training that the BCNZ gave its employees at that time.

He was one of the first employees of the new TV2 known as South Pacific Television and he became a News Director on Two Network News.

News was not going to be his career, but he did meet a young newsreader there, and she and Chris are still happily married. Chris moved into drama, and by 1981 he was directing series which captured New Zealand audiences and which are remembered today, including The Adventurer, The Adventures of Terry Teo, Gloss, Mortimer’s Patch and Under the Mountain.

The fact that two of these series have been remade now – Under the Mountain as a movie, and Terry Teo as a new series – speaks volumes about the quality of the original productions.

Chris joined the new South Pacific Pictures in 1990 as Head of Production and continued to Direct. His first outing was Strangers, which was Martin Henderson’s debut, and then Raider of the South Seas featuring two very young actors, Martin Henderson and Dean O’Gorman, and one older actor: Tony Groser, whose son Tim is better known for his political feats.

Chris directed Gold and in 1992 began producing as well as directing with the epic Ray Bradbury Theatre. He directed the important miniseries Fallout.

In 1998 together with Chris Hampson and Greg McGee, he formed Screenworks, where he produced and directed Street Legal, Doves Of War and Orange Roughies.

In 2009 he returned to South Pacific Pictures as Managing Director with overall responsibility for production. Under his aegis, the company has produced 800 Words, The Almighty Johnsons, The Blue Rose, The Brokenwood Mysteries, Go Girls, Nothing Trivial, Spies & Lies and Westside and continues to produce Shortland Street.

Chris never accepts second best. He oversees productions ensuring that all crew are the best he can get, that casting has found the best actors, and all through post, he supervises the process, ensuring that every frame looks and sounds as good as it can. Chris’s passion for music has meant New Zealand audiences have been exposed to new and exciting New Zealand talent. He has championed new actors in all South Pacific Pictures’ productions. He has trained Producers and Directors, and mentored key crew.

He is a Producer who always brings the production in on time and on budget, whilst maintaining the highest artistic standard.

He has won awards in New Zealand and internationally for his work. A true gentleman, who is respected by all who work with and for him. Chris Bailey has been a pillar of the New Zealand TV Production business and his record is unmatchable.