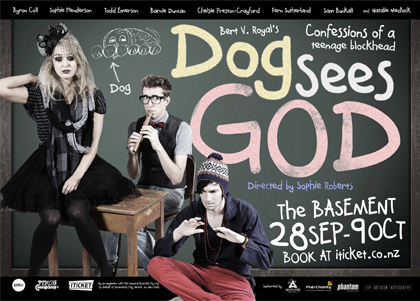 DOG SEES GOD – It’s really f**ked up, Charlie Brown!
Didn’t fit in growing up? Well, neither do they…

CB’s dog is dead, his sister has gone goth, his best friend is too burnt out to provide any coherent speculation and his ex-girlfriend has recently been institutionalised. But a chance meeting with an artistic kid sets in motion a friendship that will push teen angst to the very limits.

Based on Charles M. Schulz’s iconic Peanuts comic strip, this is a black comedy about drug use…, suicide, eating disorders, rebellion, sexual identity and the hope that, one day, we might grow up…