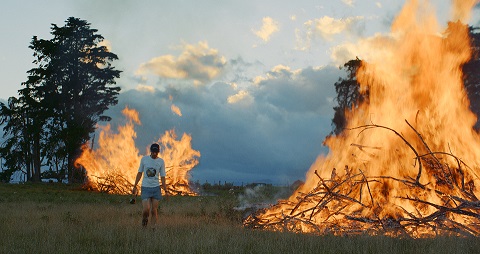 This Town will have its international premiere at the Tallinn Black Nights Film Festival, one of Northern Europe’s largest film festivals.  The film will screen In Competition in the ‘Rebels with a Cause’ section which features films from around the world that push the boundaries of cinematic art in their experimental form or rebellious message.

The festival, held in Estonia’s capital city Tallinn, from 13-29 November will host both online and in-person screenings this year.

Written by David White and Henry Feltham, directed by White and produced by Kelly Martin, David White and Aaron Watson, This Town follows a young man, acquitted of a crime, as he tries to rebuild his life while an ex-cop turned petting zoo owner, convinced of his murderous tendencies, tries to prove his guilt.

“It has been so nice to have a film be number one at the box office for three weeks, but then to also be invited to be part of this prestigious festival is a total dream,” says This Town director, David White.

“We are immensely proud of how well This Town has performed locally, and thrilled to have it selected for Tallinn Black Nights” says producer, Kelly Martin.

“This Town is such a uniquely New Zealand film in both its voice and its setting,” says New Zealand Film Commission CEO, Annabelle Sheehan.  “It is wonderful to see that voice resonate globally through the film’s selection for this prestigious festival.”

This Town was released in New Zealand cinemas by Madman Entertainment in August and topped the box office charts in its opening weekend, holding the number one position for three consecutive weeks. The film remained in cinemas for 11 weeks, taking close to $750,000 at the New Zealand box office.

Funded by the New Zealand Film Commission, This Town is distributed by Madman Entertainment in New Zealand and Australia and sold internationally by The Film Sales Company.