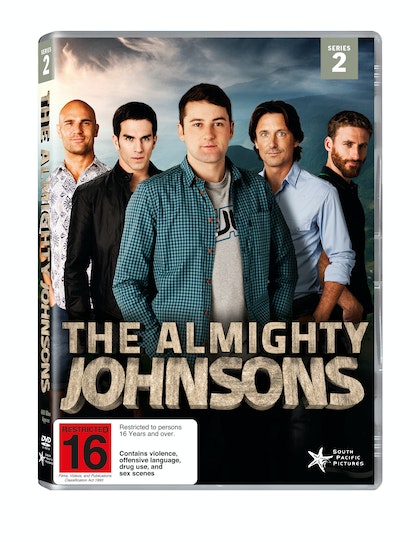 The Almighty Johnsons is a comedy-drama series about four brothers who just happen to be descended from Norse Gods. Each of the Johnson boys has his own God-like power; it’s just that their powers aren’t all that powerful. The Johnsons are typical Kiwi blokes who don’t much like to stand out from the crowd. And everyday gods have everyday struggles – striving to love stroppy women, overcoming sibling rivalry and fulfilling your God-like destiny, all while still finding the time to enjoy a few beers with your mates. In series two, the quest to find Frigg continues. Along the way several new and exciting variations will be explored and the youngest brother, Axl, will find himself on a more personal quest: to become Odin, he must first ‘become’ Odin. Cover Artwork Not Final. ** 3 disc set ** Region 4

ATTENTION USA BASED CUSTOMERS: Seasons 1-3 will be released as a box set on DVD and bluray (NTSC format) and will be availble from the 28TH OF APRIL from your local distributors.