The End of the Golden Weather 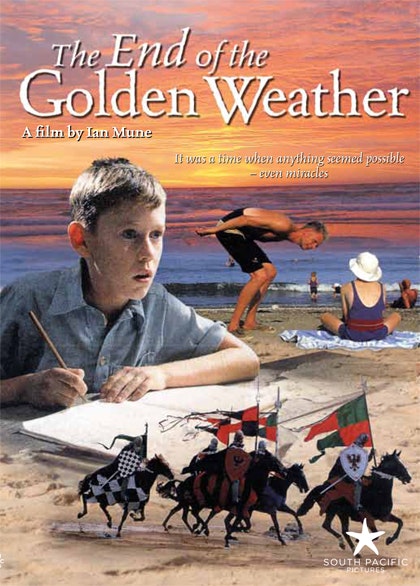 A film by Ian Mune, based on the acclaimed solo play by Bruce Mason.

Set over a Christmas beach holiday in 1935, The End of the Golden Weather chronicles the friendship between a teenage boy and the wild-limbed Firpo, dreamer and social outcast.

Geoff Crome is twelve-and-a-bit. He believes in miracles.

He sees them every day on the beach where he lives in this last perfect summer of his childhood.

Despite his father's warnings, Geoff becomes friends with Firpo - a strange, skinny magical character with a burning ambition to win the Olympic Games.

When Firpo accept an impossible challenge to run a race on a beach, Geoff tries everything to help him win - body building, weights, diet, even prayer.

But Firpo scorns them all, convinced he will win with a miracle all his own.

Geoff so much wants to believe in Firpo's miracle that he sets himself against his whole world - his family, his community and finally, against the innocent dreams of his childhood.