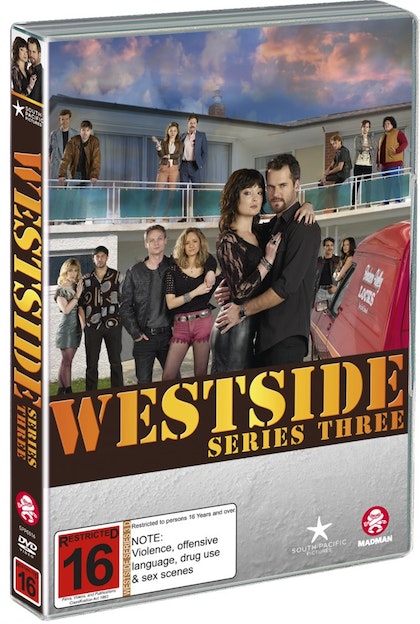 From the pen of James Griffin Westside explores the fates and fortunes of the West family as they march through history.

It is 1982 now, and as New Zealand heals the wounds of the Springbok tour, the Wests also have some healing to do. This time round, the story of the Wests is, literally, the story of two houses.In Henderson, at the West house, Ted is having his fair share of problems with a gang who have grown apathetic, with the spoils of their recent success; while Rita is dealing with the empty nest left by the abrupt and acrimonious departure of her only son.

Meanwhile, in the slums of Ponsonby, Wolf is champing at the bit as he and his fledgling gang are partying hard in their rundown villa, making themselves the scourge of the neighbourhood. For the youngest West, however, sex and drugs and rock’n’roll isn’t enough. Wolf is a young man with an ambitious eye to the future. This two houses lark is a situation that cannot be sustained, but it will take a tragedy to bring the family back together – and out of that, for father and son to realise that to survive they must work together. The mother and son reunion, however, hits a major obstacle when Wolf falls in love – with a young woman by the name of Cheryl. Mortal enemies at first sight. Yep, she’s here – the younger version of one of New Zealand’s most beloved characters. And it is all on. Big time.

Westside is a prequel to Outrageous Fortune. Over six seasons between 2005 and 2010, Outrageous Fortune established itself as New Zealand's most successful television drama series. A consistent ratings winner, the show achieved cult status and critical acclaim at home and abroad and to date has won more than 50 awards. Proudly made with the support of New Zealand on Air.