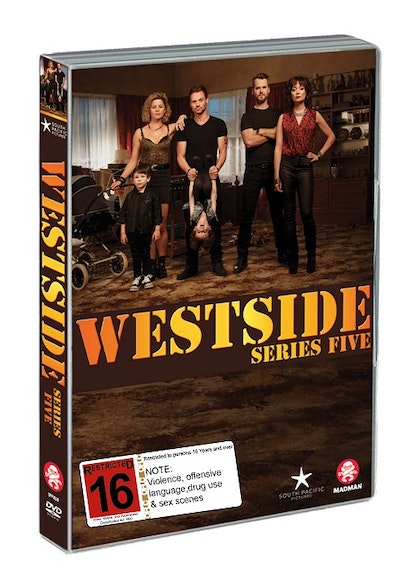 1987.  A year that begins in an America’s Cup frenzy of patriotism and end with an economy made of mirrored glass crashing down round our ears.  Meanwhile, out west, the old political order is being overthrown, usurped by a gumboot-wearing, grinning idiot, towing a concrete-mixer behind the mayoral Daimler.

1987.  This is the year when the West family, one and old, go toe-to-toe with a foes unlike any other they have confronted before.  This year the Wests take on the old school of Auckland criminals, the ones who have been round long enough to become part of the establishment.  The ones who do not like upstarts like Ted, Rita and Wolf on their patch.

WESTSIDE 5 begins with a birth, as Pascalle enters the world, to join her 3-year old twin brothers, Van and Jethro.  Wolf is now the proud father of three kids.  Or four, if you count Brandon, Anne-Marie’s son, who is born the day before Pascalle.  Wolf has a secret family now, yet another skeleton in the West family closet waiting to be outed – or to be used as collateral in the generational war that shapes this season.

This far in, there are now heaps of secrets lurking in the West family archives just waiting to emerge at precisely the wrong time.  Rita, alone, has a truckload of history just waiting to bite her on the arse.  And 1987 is definitely the year when a couple of Rita’s juiciest transgressions will roll up to her door.

Neither is Ted immune from his past and his reputation, to the extent where just being Ted West is enough, apparently, to land you behind bars.

Meanwhile Wolf, only just old enough to have a past, ends up having to rely upon Sparky to keep his secrets and protect his future.

Yet even as these secrets and lies threaten to rip the family apart the Wests as a whole must figure out a way to park their differences, call in their associates and battle a foe that has the power to control electricity and running water.

1987.  The year the West family faces extinction; when they must choose to either fight or flee.

And fleeing, let’s face it, is not in their DNA.